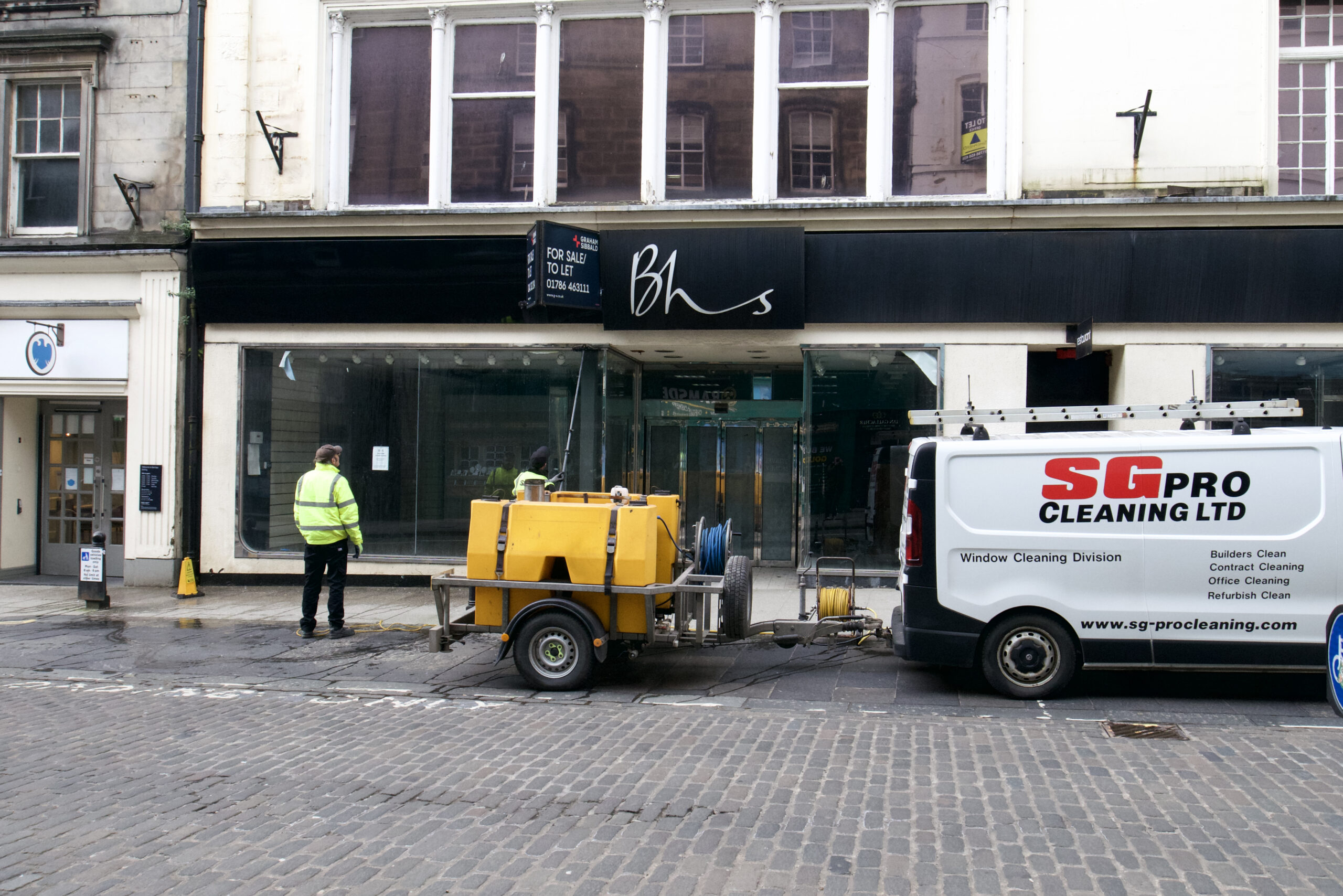 A clean up team has been busy preparing Stirling’s empty shop windows ready for the launch of the city’s ambitious Street Stories project.

They have been working on behalf of Go Forth Stirling Business Improvement District (BID) which is set to transform eight stores into vibrant works of art.

Street Stories will see animated artworks featured on vacant shop windows, such as the city’s former BHS and Argos stores, when the initiative is launched next week.

Local artists, including Jacqueline Marr, Michael Corr and David Galletly, are taking part in the ground-breaking project which will revamp the city as it prepares to welcome shoppers back following Covid restrictions.

Go Forth Stirling Project Director Danielle McRorie-Smith said: “We had a team from SG Pro Cleaning out last week cleaning windows, power washing and generally sprucing up the shopfronts of the stores being used for Street Stories to make sure they look their best.

“Quite a few of the shops we are using have been empty for a while now with BHS – a really important site in the city – closing almost five years ago.

“It’s great to see them cleaned up for Street Stories and hopefully in the coming months and years we will see them back in use as new shops.

“We’re almost ready to install the eight fantastic artworks in the windows and I’m looking forward to seeing them in place and finding out what the people of Stirling think of them.”

One of the artists involved in Street Stories is abstract and fluid artist Roisin Mackenzie whose talent for painting flourished during the first lockdown.

Roisin was born and raised in Raploch, where her family still live, and much of her work is inspired by water particularly the River Forth.

She was one of many artists who submitted works to be considered for Street Stories following an appeal to Stirling’s creative community last year.

Artists were invited to submit art celebrating Stirling, its people and heritage which could be brought to life via interactive Augmented Reality (AR) – multi-sensory animation triggered by a free downloadable smartphone app.

Roisin was delighted to be selected by the judging panel and is keen to see her paintings, which feature the River Forth, take pride of place at the former BHS store in Port Street.

She says: “I’m so happy to be involved in Street Stories and being such a new artist really didn’t expect to be chosen so this is a great achievement for me and I’m so excited to see all the artworks come together.

“When I first read about the project and decided to enter my art, I thought it was a great idea that would make Stirling look much prettier and be good for getting more footfall through the city.

“I knew straightaway that I would love to take part.

“I grew up beside the River Forth and it symbolises Stirling for me which is why I wanted to use it for Street Stories with the idea of the Forth weaving its way through Stirling.”

Ms McRorie-Smith said: “We’ve got a real range of stories to tell covering archaeology, mental health, pioneers and history plus a number of different mediums so there is something for everyone to enjoy.

“We were delighted with the calibre and range of the submissions we received for the project which gave us an eclectic mix of different options to choose from.

“This is an exciting venture which will transform and enhance the city centre while giving local artists the opportunity to see their work come to life through animation.

“It will also help us highlight the commercial spaces which are available, give both residents and visitors an insight into Stirling’s heritage and introduce an interactive trail to encourage footfall across the city centre.”

Joe Nixon, Creative Director at Arch Creative who are working with the BID on the project, said: “Over the past few months, we’ve been working closely with our eight selected artists to understand their artwork in order to develop the animations.

“These will further enhance the unit artwork installations by giving viewers an immersive augmented reality experience whilst highlighting some of Stirling’s incredible history.

“We can’t wait to showcase some of Stirling’s amazing talent in this innovative way and create these new points of interest across the city. After months of preparation, we’re excited to unveil Street Stories Stirling and celebrate the city’s re-opening.”

The empty shops involved in the initiative are based in Port Street, Upper Craigs, the Thistles and Murray Place and include the former premises of Laura Ashley, The Works, Trophy Centre and Designer Distinction.