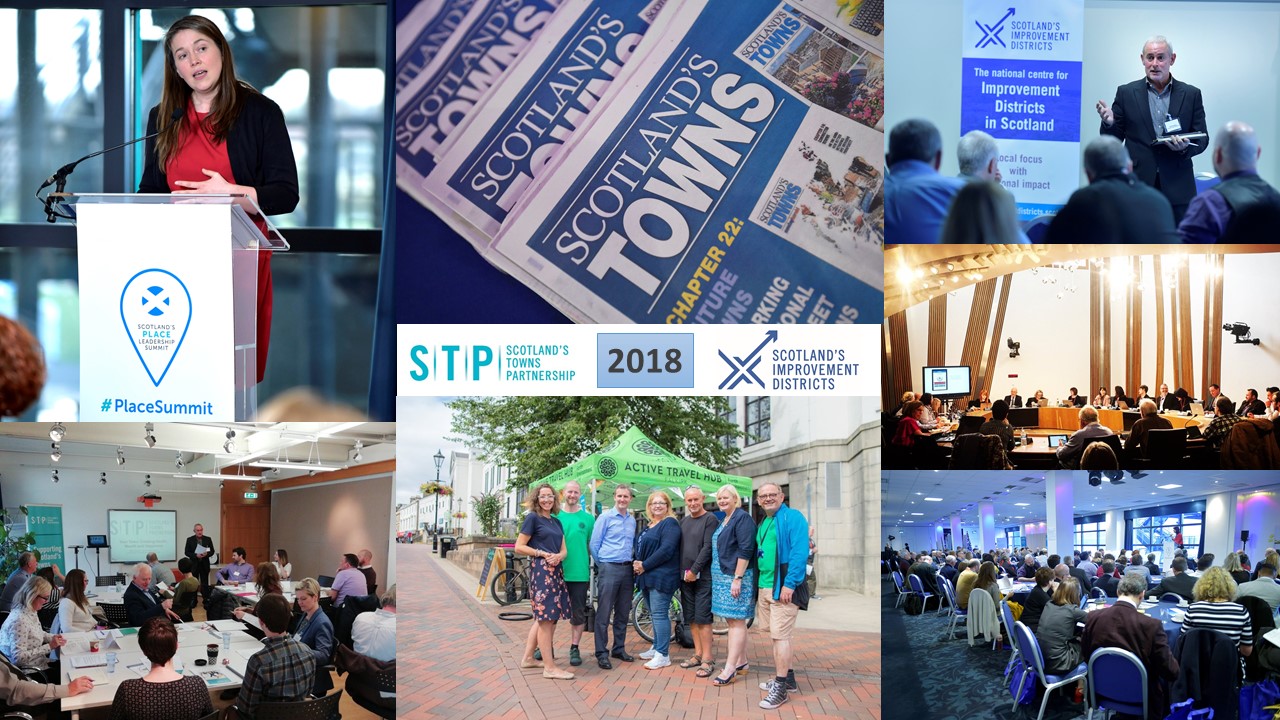 Welcome to the December 2018 bulletin from Scotland’s Towns Partnership and Scotland’s Improvement Districts. We would like to wish you a wonderful winter break and a positive start to supporting Scotland’s communities in 2019!

Please see below for:

If you have any queries, please don’t hesitate to get in touch. If you are not already, you can also sign up to our newsletter, and become a member to receive free & discounted entry to events, among other benefits.

You can also view upcoming events at our events page, and catch up with the latest news at our news page.

The Chief Officer of Scotland’s Towns Partnership, Phil Prentice, has welcomed Derek Mackay’s new £50m Town Centre Fund, announced in the Scottish Budget, as a timely boost for communities ahead of the festive period.

The Cabinet Secretary for Finance, Economy and Fair Work made the announcement in the Scottish Government’s Draft Budget 2019-20. A new ring-fenced £50 million Town Centre Fund for 2019-20 has been allocated within the local authority capital settlement to drive local economic activity and to stimulate and support place based and future looking economic improvements to town centres.

Speaking after the Budget, Phil Prentice, Chief Officer of Scotland’s Towns Partnership said: “It’s clear that Santa has had a word with the Finance Secretary ahead of the Budget this year, as the announcement of a new £50m Town Centre fund is a really welcome confidence boost ahead of the festive period”.

The following events by Scotland’s Towns Partnership have been confirmed for early 2019. Please save the date, and full information and booking opportunities will be provided in the New Year.

You can read reports and download presentations from all of our 2018 CPD workshops and Cross Party Group meetings on our Wakelet page here.

Highlights from a Year Supporting Towns and Improvement Districts

It’s been an active and enjoyable year supporting all those who work for positive change in Scotland’s towns and city districts.

Here’s a look back at the past 12 months: please click on the links to discover more about the key initiatives, events and announcements that have been made in the towns landscape over this period. We hope you find the information helpful and that it generates ideas and inspiration ahead of the New Year!

The Chief Officer of Scotland’s Towns Partnership, Phil Prentice, has welcomed Derek Mackay’s new £50m Town Centre Fund, announced in the Scottish Budget, as a timely boost for communities ahead of the festive period.READ MORE20TH DECEMBER 2018

East Lothian Council are recruiting for the following positions, with 27th January as the closing date for applications.READ MORE17TH DECEMBER 2018

SCOTSMAN FEATURE ON DIGITAL AND ENERGY OPPORTUNITIES FOR TOWNS PUBLISHED

The latest quarterly feature on Scotland’s Towns has been published in the Scotman’s Vision Magazine. This edition explores opportunities linked to digital and local carbon energy infrastructure, with guest articles from BT Scotland and SP Energy Networks.READ MORE11TH DECEMBER 2018

Living Streets Scotland – Updated research shows that Christmas shoppers who walk to high streets could be spending more than those who drive there.  READ MORE10TH DECEMBER 2018

The latest CDAS newsletter marks Human Rights Day, and looks at how community development and place-making can embed a human rights approach. The newsletter can be read here. READ MORE10TH DECEMBER 2018

After the successful launch of the Cycle Fund in 2018, ScotRail is delighted to reopen the fund for applications for projects starting in 2019.READ MORE