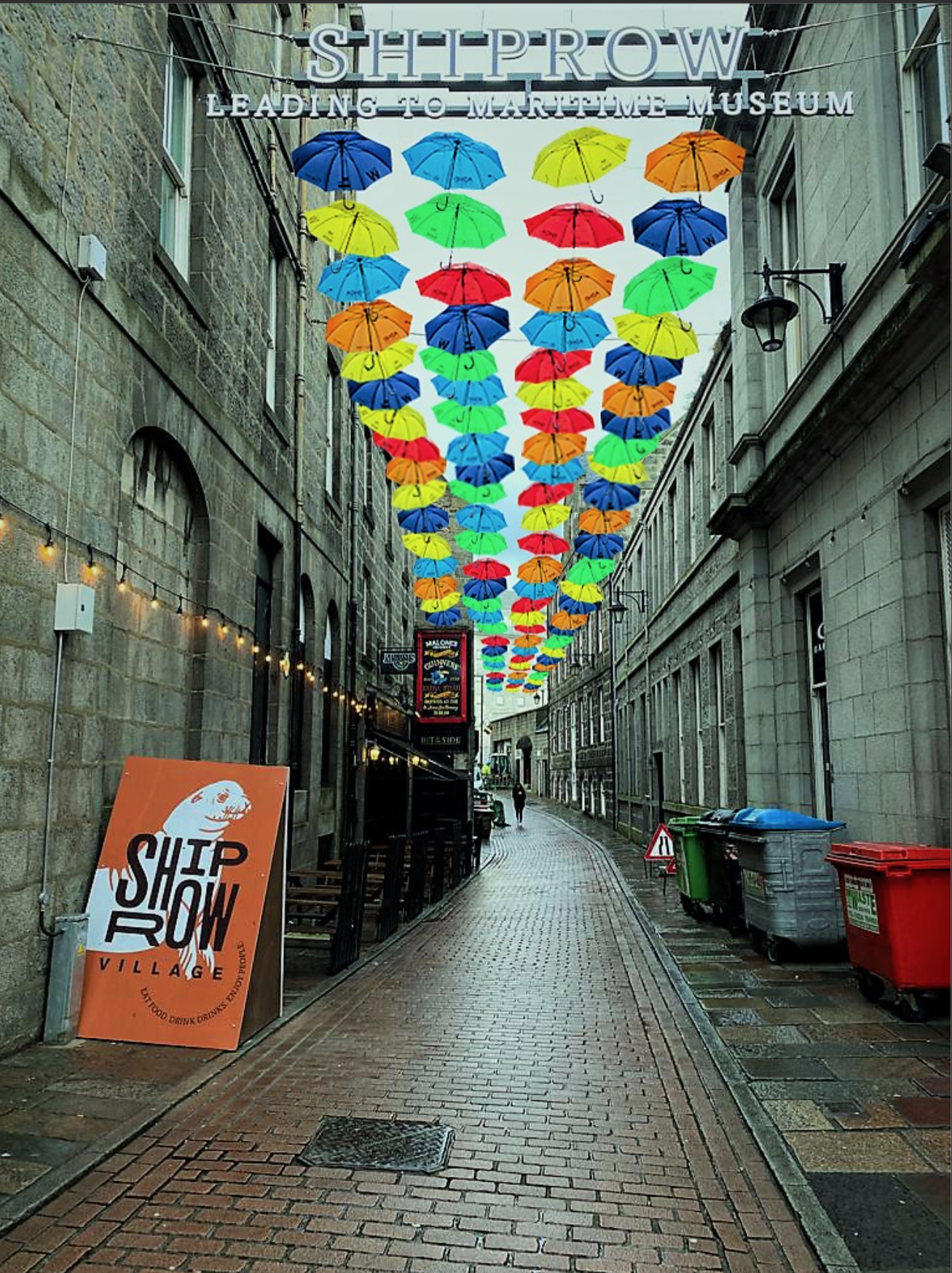 Brollies above the Business District

It’s not just seagull’s that will be soaring above our city centre streets this summer, Shiprow in the city’s business improvement district, is set to play host to a quirky colourful art installation to raise awareness and understanding of ADHD and autism.

City centre BID, Aberdeen Inspired is bringing the uplifting temporary installation to the city centre in June, working in partnership with the ADHD Foundation as part of a three-year programme.  The iconic installation will feature a canopy of hundreds of vibrant, colourful umbrellas suspended across the city street.

A detailed planning application has been submitted for one installation at Shiprow following positive engagement with local businesses and residents.  It was expected that another installation would be sited in the West End, with Bon Accord Terrace being the most suitable location. However unfortunately despite positive engagement with local businesses Aberdeen Inspired could not enlist the support of all building owners in the area that it needs to temporarily attach the fixings for the installation, so the organisation is now pursuing other West End locations in a final attempt to secure the necessary permissions to accompany a second planning application.

Commenting on the news that Shiprow will house the main installation, Adrian Watson, Chief Executive of Aberdeen Inspired said “We are thrilled to reveal Shiprow as the location for our upcoming Umbrella Project and we know how excited the surrounding businesses are to have such an iconic project on their doorstep.

“We are not only proud to bring such an uplifting project to the city for the first time but also to be playing such an important part in flipping the narrative of neurodiverse individuals, and instead, recognise the strengths and ability of those with cognitive differences.”

“The display will encourage people from all walks of life to come into the city centre, enjoy all it has to offer, take part in the celebrations and embrace the joy the multi coloured installations.

Coming to Scotland for the first time following huge success in other UK locations since 2017, the installations aim to raise awareness of and to celebrate the ‘umbrella’ term of neurodiversity, including ADHD, autism, dyslexia, dysgraphia and dyspraxia.

Commenting on the news that Shiprow is set to be one of the locations, Gavin Paterson, General Manager at the Aberdeen Douglas Hotel said: “The Shiprow Village project is creating a welcoming space where local food and drinks providers can help us continue the street’s long-lost legacy of fresh ingredients and skilful craftspeople. Our key aim here is to return to the vibrancy and radiance that Shiprow once had, and there’s nothing more vibrant than the Umbrella Project.

“The installation will be undoubtably a hit on social media, but nonetheless, the inherent message of raising awareness and celebrating the ‘umbrella’ of neurodiversity has such strong ties with community spirit, wellbeing, and support, all of which are dearly important to us here throughout the Shiprow Village and the Aberdeen Douglas Hotel.”

A host of other cities, including Cardiff, London, Liverpool, Brighton, Glasgow and Edinburgh will also be hosting umbrella installations this year.

Harbour Energy is the principal sponsor of the project and Aberdeen Inspired were also awarded a grant of £12,500 towards the project – roughly half the cost of one installation – through the Scottish Government’s Scotland Loves Local Fund II which aims to encourage people to think local first and support businesses and enterprises in their community.

The project will be in place from June until late August 2022.